TransAsia plane clipped a bridge before crashing in to river (VIDEO) 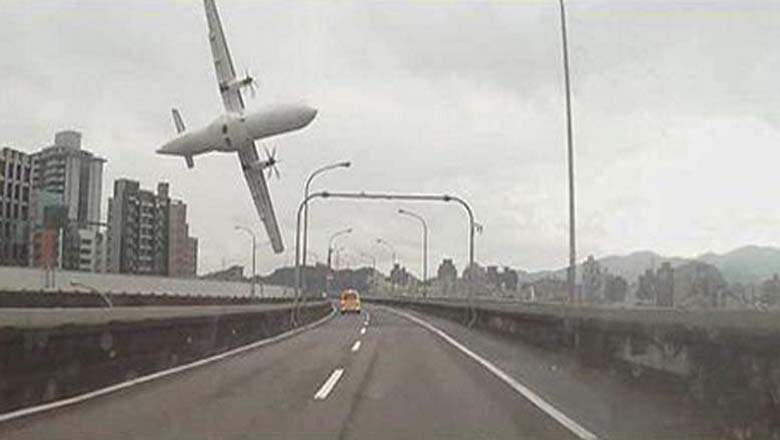 The TransAsia ATR 72-600 plane with 58 people on board was on a domestic flight when it hit a road bridge in the capital Taipei.

The moment of impact was captured on a passing driver’s dashcam, and shows the aircraft’s wing clipping a taxi before it disappears out of view.

According to reports, it lost contact with air traffic control two minutes after take off from nearby Sungshan Airport.

It was heading for the Kinmen islands, 31 passengers were Chinese, three of them children. The other 22 passengers, including one child, and five crew were from Taiwan.

Wu Jun-hong, a Taipei fire department official coordinating the rescue operation, said those missing were either in the fuselage or had been swept down river.

Television footage showed survivors wearing life jackets wading and swimming clear of the wreckage, which was surrounded by rubber boats.

The Ministry of National Defence said it had sent 165 people and eight boats to the rescue scene, joining fire department crews.

No reasons have been given for the crash, although a ‘flameout’ – caused by a fuel supply problem or faulty combustion – is thought to be a possibility.

According to an air traffic control recording at liveatc.net, the last communication from one of the aircraft’s pilots was “Mayday Mayday engine flameout”.

The taxi driver and his passenger were both injured when their vehicle was hit.

Last July a TransAsia ATR-72 crashed while attempting to land on the island of Penghu off Taiwan, killing 48 people and injuring 10.

The plane involved in Wednesday’s crash was one of eight ATR 72-600s ordered by TransAsia in 2012.

The 72-seater aircraft are mainly used to connect Taipei with smaller cities and islands.